It was April 1st 2009 and the Eurocopter Super Puma L2 helicopter was expecting to land at Aberdeen at 1314 hrs. This was still 20 minutes away but, at the 2000 feet cruising altitude, the coast landfall 10 miles away was just in sight.

It was about half way through its busy schedule to and from the rigs that day, flying at nearly full speed with a full complement of 2 pilots and 14 passengers. The co-pilot radioed base that all was normal. Only twelve seconds later came two MAYDAY calls

Below, was a modern, powerful, rig supply ship, the ‘Normand Aurora’, on a so-far uneventful trip. Someone on watch on the bridge changed all that. It was good visibility and there was a shocked shout of alarm. Two miles away, the helicopter was hurtling into the sea with separated rotor following it. Then came the bangs, the black smoke and the explosion. The ship swung towards the smoke.

Launching their fast,-rescue inflatable. It hit the water with a loud slap and accelerated away. Leaving the mother ship quickly far behind as its helmsman gripped the steering wheel with white knuckles and stiff-armed the throttle fully forward. He and his crew were desperate with hope that there would be something that they would be able to do: that there would be someone that they could help among the unfortunates in the helicopter cabin that had plummeted into the sea at high speed. But fearful at the same time. After the headlong two miles, its crew found a large circle of churning water. Within there were life rafts and debris. They also saw eight people; none were alive.

Above are planet gears from the downed helicopter showing corrosion from their immersion in the sea. They are without an outer casing destroyed in the accident. There should be eight gears but it can be seen that one is missing. The destruction of the one, missing planet gear was the cause of the tragedy. Above shows only a part of the gear boxes and trains in the Super Puma [and other similar helicopters].

Had there been no advance warning of the impending catastrophe at all?

The drive shaft from each of the two engines in the helicopter runs at 23 000rpm [that is, the internals of each engine is rotating 380 times in one second or around 5 times as fast as a family car engine!]. The main rotor blades rotate at 265rpm. This means that the helicopter design engineer had to design a gear box to give a reduction of nearly a factor of 100. It has to fit in as small space and have as low a weight as possible.

When the designer needs to slow down the rate of rotation of a shaft by a large amount like this, she usually goes for an epicyclic gear design. These are commonly known as a sun and planet gear sets. This is what is found in a Super Puma between the fast spinning engines the relatively slowly rotating main rotor.

This epicyclic design was shown in the textbooks of The Lad like this, and similar diagrams are still shown today.

In real life where very large power has to be transmitted in as small a space as possible, there are more planet gears than in the textbook diagram. They fill the circumference and each is wide and massive. Such planets of half of the Super Puma epicyclic gear train are shown in the salvage photograph above.

To see how designers calculate the variables in a real design of epicyclic gears see – http://www.roymech.co.uk/Useful_Tables/Drive/Epi_cyclic_gears.html

Even though the designers seek to make engines and gearboxes as reliable and free from the risk of components failing as possible there is still a need to keep a check on machinery health. For a Power Station generator or a car engine there is no great, inherent problem to be anticipated if it rapidly comes to a halt after 30 sec of noisy running. It is quite a different problem if the engine is powering an aircraft flying several miles high over the ocean. Here a significant risk of such a sudden stop is not acceptable. They must head off such failures before they happen. They must search for signs of any problems well in advance.

The magnetic chip detector is one of the neat ideas that help maintenance teams do this. It is a simple concept. Many of the most highly stressed components are made of steel which is magnetic. One of the commonest symptoms of failure, when such a component wears or suffers fatigue cracking, is that chips of metal are generated and released from the parent component. The oil, as it is circulated throughout the engine, washes such chips away and usually takes it to the lowest part of the engine. En route, if it washes over a single small magnet, it will be captured by the magnet. The maintenance team simply unscrew the magnets at regular intervals and an early alarm can be raised if any chips are found sticking to the magnet.

Such detectors are positioned at various places within the engine oil flow where any chips may be washed over them. An alternative design is to provide twin magnets close together. Coupled to this type of device is a power supply and electronic detector to signal to the helicopter pilots, even in flight, when a chip bridges the two magnets. Such a design is shown below.

There are many such detectors designed into the Super Puma. Several are in the vicinity of the main gear box. The design of such detectors is another one of the many examples of the nexus where the design principle of “simple and reliable” approaches close to the principle of “too crude for the risk burden”. The designer has to consider which is the truth in every such case. Did the detectors work this time or not? If not, why not? See the next post.

Engineering turns the forces to the benefit of mankind and the results have immense consequences. These consequences are, on the whole, beneficial but sadly, as with any efforts of the human race, for some individuals can be malign.

Bloody skirmishes to understand each way that a structure can fail and to avoid them all are a repetitive feature in engineering history. For ordinary structures most of the skirmishes have been avoided and, nowadays, fewer new ones appear. But fresh demons occasionally burst forth to confound us in new campaigns to complete new tasks or use new materials. When they do, they extract their price in blood or treasure.

Professional engineers have to be continually alert. The engineer knows that the nature of her or his work usually brings great benefit. But it can, also on occasion, bring tragedy. 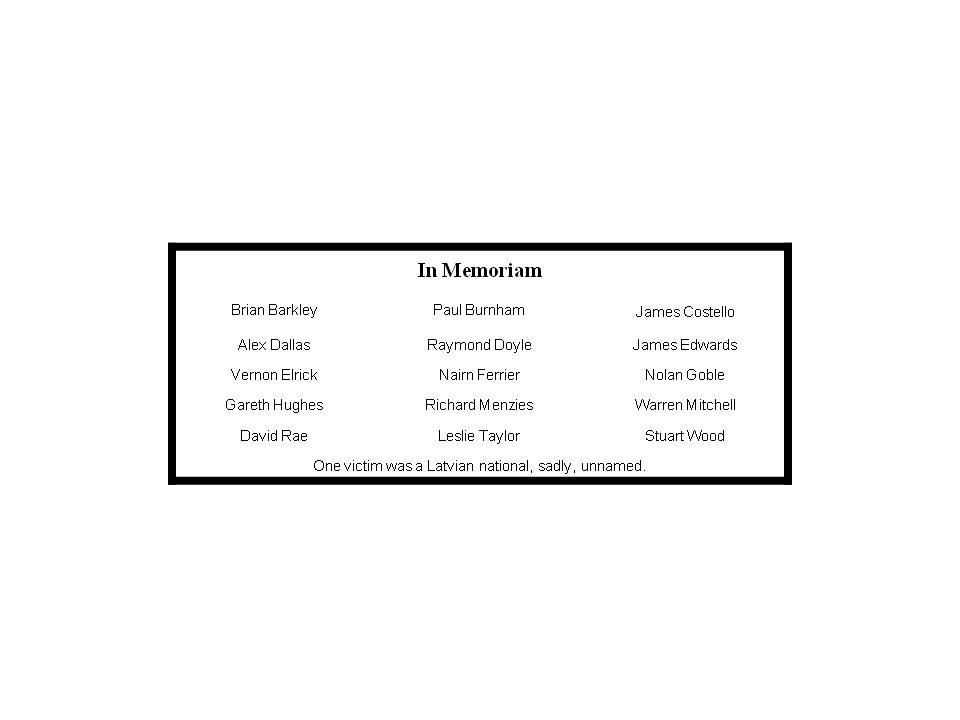 Engineering is one of the three drivers in the advancement of the human race. This blog aims to give to career seekers and also to the general public a taste of how this might be so. They are not well served by the current media. It is an engineer posting: not a ‘scientist’. It describes real professional engineering as it is in the real world usually in the present and occasionally as it was in the recent past.

Engineer View all posts by The Lad

One thought on “Super Puma Down – I”